This is St. Hilda's, in Whitby, North Yorkshire. 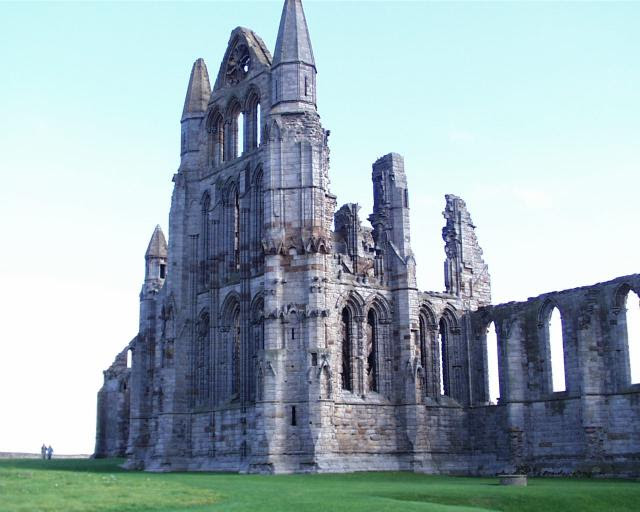 First founded in 657AD, this glorious Benedictine abbey was the venue for King Oswiu of Northumbria's 7th century 'Synod of Whitby', wherein it was decided that the Northumbrian church would adopt the Roman Catholic calculation of Easter and monastic tonsure (the traditional monks' haircut!). It was also home to the Saxon poet, Caedmon.
The abbey was re-founded in 1078 on the orders of William de Percy, and re-dedicated to St. Peter and St. Hilda. It survived until 1540, when it was finally sacked during the Dissolution.
The ruin has since been a landmark for many a sailor, and an inspiration to many a writer, including Bram Stoker in the process of writing, Dracula. I follow in their esteemed footsteps with a poem about my love of medieval architecture, and the compulsion to draw features and plans of St. Hilda's Abbey -


I want to talk of curves and lines,
of willow trees, and creeping vines
and beautiful decay, I want to talk
of summer days spent
beneath your shade,
to vanquish all who seek to
take an ounce
of majesty from you.

O the things I want to do –

To touch you
And draw you
and coat you and call you
in dreams of sandstone and ice cream,
to hear you scream my name
back through time
in centuries infinitely more sublime than
this I dare call mine. I want to talk of
curves and lines –
Oh yes, and better still,
I want to caress them long and
Lithe,
Arched and true;
I want you – for as long as you’ll
have me, abbey, for as long
as you’ll let me
sit and copy
every swoosh and circle,
every rose and purple wildflower –

I want to taste you
for hours – to wrap my
fingers round pillars and butts
and cover you in the gelatinous
lustre of grace. I want to leave
it on your face, forever, – so you
stink of me, and I of you,
so we will be like the glued pigeon
feathers that cling to your hair and edges –
both of us soft and solid wretches,
unwillingly pledging
to be together until we are free.
Posted by Amy at 01:53