Her mother always said she was a dreamer. Embarrassing…like an adult who believed in Santa. Well, who’s laughing now? Olivia smirked, as she climbed over the farm gate in the pre-dawn twilight. She dragged the saddle off the gate’s crossbar behind her, and began striding across the field to the stable-block. Sometimes dreams come true… Impossible is always possible, with patience…and faith.

Olivia didn’t pretend for a minute that her dream had been easy to achieve. Of course, it hadn’t. It had taken her a long time to find Peggy…but she’d always said, some day, she would own her own trusty steed. Her mother had laughed at her, doubtful that she’d find what she sought…and it was true - Peggy was rare. But Olivia had been determined.

As she turned through the stable-block door and swung the heavy, leather saddle off her forearm over the gate of Peggy’s box, the mighty creature shifted, turning towards the noise. Her huge brown eyes met Olivia’s blue ones, and the young woman smiled at her new best friend. The equine gently snorted its approval of her presence, and nuzzled her pocket in search of a mint. Olivia obliged, digging into her gillet for the sugary treat and rubbing Peggy’s velvet muzzle whilst she chewed.

Taking the bridle from her shoulder and laying it across the saddle’s seat, Olivia retrieved a grooming brush and pulling-comb from a hook on the stable-block wall. She let herself into the box beside Peggy, and as she worked the brush over the creature’s grey coat and combed out her glistening, cream-coloured mane, the sun rose over the trees outside.

Olivia broke sweat in the morning heat, removing Peggy’s latest patches of baked mud from her shoulders and hocks, and flicking the discs of packed earth from her hooves. Peggy liked to roll in the dust after a ride, and though Olivia knew her hard work would be cancelled out on their return, she wouldn’t have had it any other way. She’d longed for Peggy; searched for her…and she couldn’t possibly complain.

After a good forty minutes of grooming, Olivia finally held up the bridle and presented the bit to Peggy’s mouth. It was a soft bit; a straight, nylon snaffle, designed for a responsive steed. The equine took it on the first present and stood calmly, as Olivia fitted the saddle she’d had custom made, ensuring the girth was securely buckled.

Letting herself out of Peggy’s box a moment, Olivia hung the grooming implements back on the stable-block wall.

“You look beautiful, Peggy,” she smiled, donning her riding helmet as she admired her handy work in cleaning and buffing both creature and tack. Peggy whinnied softly in response, as though agreeing that, as always, she did indeed look wonderful. “There’s just one thing…”

Olivia took down a jar of hoof oil containing a large brush, and a torn piece of suede leather, from a shelf above the grooming brushes. Slipping back into Peggy’s box, she bent down to the creature’s feet and painted each hoof with the oil, making them glisten with impossible colours, like petrol on a wet road. Then she stood, wiping her hands on the leather rag.

“There,” she said, approaching Peggy’s great head and meeting one glassy brown eye. “Almost done.” Reaching up, she brushed the animal’s curled forelock aside and polished the twisted, golden horn that protruded from her skull, inducing a magnificent shine.

Olivia placed her tools back on their shelf, and led Peggy from her box, past the other animals stabled in their block. As they reached the doorway into the morning sun, she jammed her foot in the stirrup, took hold of the pommel, and mounted with a quick bounce.

Feeling her rider aboard, Peggy shifted, restless with anticipation. Olivia didn’t tease her…she pointed the creature’s nose directly towards open fields and gave the signal for ‘gallop’. As the wind rushed at her and the speed increased to an impossible flash, she knew for certain, she had been right to search for Peggy…right to know she existed.

Her mother’s words resounded in Olivia’s mind – “Most girls are happy with a pony! Why must you fool yourself with this fantasy? …this silly legend?”

Because I knew different, she thought, digging her heels into Peggy’s flanks and feeling the creature obediently spread two, white wings around the custom-made saddle. I knew there was one that could fly….

Woman and beast rose then, into the crimson sky…and it was anyone’s guess where their morning ride would take them.

For Lydia, who inspired this tale, by being everything 'Peggy' is not! 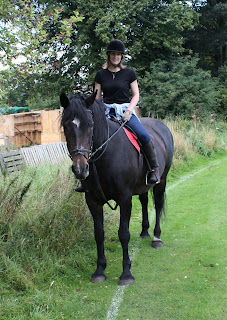 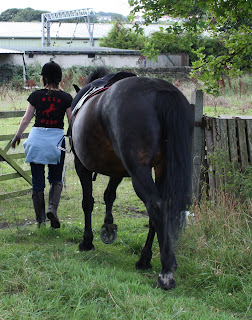